When intuitive knowing meanders and shifts 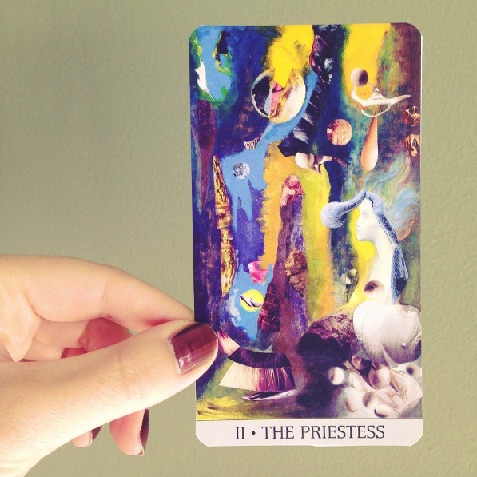 image from the Japaridze Tarot

I run in the circles of tarot, metaphysics and new-age spirituality. And love this circle as I do, this realm can lead us to over-simplify things. You know, we talk about following our intuition as though we all have this super clear, totally certain intuitive knowing that leads us effortlessly to the truth.

You’ve probably heard the advice that goes: just trust your intuition. Tune into your inner knowing. Let the truth reveal itself to you.

I guess I should clarify here that I do, of course, believe in intuitive knowing! I think mainstream culture still has a lot of disdain for the concept of intuitive knowing, much preferring to approach things through rational knowing. This is probably why the subcultures that value intuitive knowing seem to thrive – there’s not a place for us at the mainstream table, so we’ve established our own little corners of existence.

The thing we sometimes skip over, though, in our intuition-promoting circles, is that intuitive knowing sometimes circles, snakes, zig zags and meanders. This type of knowing doesn’t always appear within us as a sudden burst of clarity. Instead, it often unfolds in strange ways, dropping clues and breadcrumbs. Identifying the truth that your intuition is guiding you towards can indeed be quite like solving a puzzle.

And then, sometimes we think we’ve reached a place of intuitive knowing. We think we know our purpose, we think we’ve nailed down the truth, we think know what it is we are meant to do from here. And perhaps that answer is right for the time being. But eventually, we may find we are pulled to go deeper. That, in fact, the core truth is still a few layers deeper than where we’ve arrived.

This can be exhausting. After all, humans as a general rule do not like uncertainty. We crave that aha moment, we crave the solid understanding of who we are and what we are here to do. And when we seem to find that solid understanding, we cling to it. We don’t want to go deeper. We don’t want to be uprooted again. We want to, at long last, find nirvana and set up permanent camp there.

But this is rarely the way the truth works. The truth reveals itself in layers. What right now might seem like an ultimate and final intuitive knowing may actually only be a sliver of the big picture. It’s much like the image of the High Priestess sitting in front of the veil. The entire veil is not dropped at once. We get a peek of corners, we get various viewpoints of what lies beyond that veil. But the entire illusion is not dispelled in one fell swoop.

Ironically, it is clear that I can’t get at the core of the truth with what I’m trying to write here! And that is because the truth does move at it’s own pace. I’m still working through it. Intuitive knowing reveals itself in layers, in a spiral journey.

If you do know right now – if the truth (or at least the current manifestation of the truth) has unfolded within you…yeah. That’s powerful. Act on that knowledge! Respect your awareness.

But if you don’t know…if you feel like you’ve long been stumbling towards the truth only to find more and more diversions and dead-ends and labyrinths…know that this is okay. There is no race. The truth moves at it’s own pace. Sometimes the wandering is necessary. Sometimes the deeply frustrating moments of unknowing are exactly what you need before setting into the truth. And of course, even once you’ve settled into the truth, you’ll likely find the truth shifting yet again, sooner or later.

This is another lesson of the High Priestess. She is comfortable existing with mysteries. She’s invested in the truth, but she’s not addicted to truth. She trusts the unfolding of her own knowing, glimpsing beyond the veil in bits and pieces, engaged in a never-ending dance with the truth. When the time comes to hone in on the truth, she does not resist. But when the truth is evasive, she does not despair. She unites herself with the mystery, letting the truth move to it’s own rhythm.