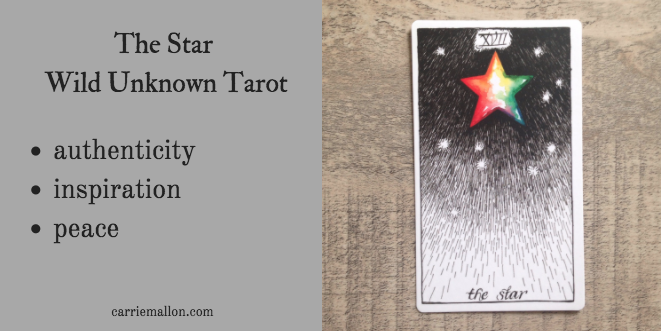 The Star Tarot Card Meanings in the Wild Unknown

Way up in the dark of night, a large star glimmers spectacularly. Ten smaller stars are scattered about, but the center star commands attention. This star is adorned with the colors of the rainbow, blending into one another. The full-spectrum color gives the star an air of holistic, healing energy. All colors are present, all colors are even, and they are contained safely within the star. All is as it should be.

A commenter pointed out that this is most likely a depiction of the North Star, with the cluster of stars to the right being Cassiopeia. This is symbolically reverent, as we talk about following the North Star when we embark on our own authentic path. The Star represents the magical sensation that comes when you live in a way that feels true and right to you.

The Star gives its light freely, without holding back. But it is also unassuming. The star draws attention quietly, with a sort of serene power. A beautiful, calming influence is present in this card. This star is a reminder that hope is present even in the darkest of nights.

The positioning of the bright star is near the top of the card, and the lines on the card draw our attention upward. The lines are sparser at the bottom of the card, and get darker and darker as they near the top, giving the visual effect that we are standing far below, looking up at this glowing beacon of hope.

As with many images in the Wild Unknown, there is a simplicity to the star. It isn’t weighed down with heavy symbolism or overwhelming imagery. After enduring the chaos of the Tower, we reach the peaceful, smooth reprieve of the Star.

Many depictions of this card show a naked woman leaning over a pool of water. Her nudity could be thought of as representing authenticity, a complete willingness to show up exactly as you are. The woman pours water from two jugs, which could represent inspiration and creative flow. The Waite-Smith depiction shows seven stars, which could represent the seven chakras and the Star’s association with holistic healing.

I often associate the Star with the infinite creative well we each have access to. We are always plugged into this universal energy, this wellspring of spiritual lifeforce. The Star card offers us the gift of letting down our barriers and reconnecting to that source energy.

This card also has some healing connotations. The Star offers you a reprieve, a chance to make peace with whatever turmoil you’ve experienced. The Star shows that despite your battle scars, you can still be vulnerable. You can still trust, you can still find a way to show up in this world as your authentic self. Your greatest strength is activated when you devote to being real.

The Star is often a reminder to listen to the quiet whispers of your inspiration. What “north star” are you being beckoned to follow? Even if you have been hurt in the past, now may be the time to step forward with renewed hope. Healing, integration and acceptance are readily available to you. Let your guard down and experience this holistic energy.