The Four Tendencies and the Four Knights 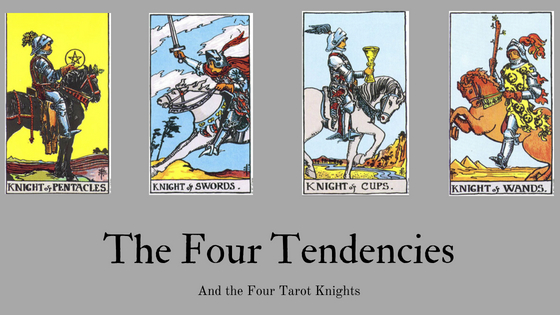 A couple of years ago I decided to start an accountability system with a friend. I have always struggled to follow through on what I want to complete, so I figured having another person to help me stay accountable would be really useful. I mean, it’s one thing to let myself down, but I definitely wouldn’t let another person down…right?

Although it has been incredibly valuable to have someone helping me stay on track, I was disconcerted to realize that although I’d made some improvements, I was still really struggling to follow through even with external accountability. I described this to my accountability friend and she told me about a book she’d recently read, The Four Tendencies by Gretchen Rubin, which lays out four different ‘types’ of people and how they respond to expectations.

It turns out that I’m what Gretchen Rubin calls the “Rebel” type, which means I resist internal AND external accountability. Oh my gosh! Realizing this has been revolutionary for me. I’ve now shared this framework with several of my mentoring clients and watched it set off light bulbs. It’s a simple concept, but can really lead you to better self-understanding. And with better self-understanding you can find more effective ways to navigate your life.

Having these tendencies as a reference is a reminder that we are not all the same. For example, if I was an Obliger – someone who responds well to external accountability – I would have an easier time staying accountable to my friend. Figuring out what works for you when it comes to expectations is not one size fits all. Understanding your tendency helps you customize your approach.

Since I see the world through the lens of tarot, I’ve been thinking about how the cards might help you understand and work with your tendency and I think the four knights fit best here. The Pages have a more playful approach, and the Kings and Queens a more mature approach. The Knights, though, they’re in a state of flux trying to figure out what works and what doesn’t. Lets take a closer look at the four tendencies and the four knights.

As you read this, consider which best describes you. I’ve included some advice on how you might adjust your approach to expectations once you are aware of your tendency and corresponding knight.

The Upholder tendency could be described by the Knight of Pentacles.

Upholders respond well to both internal and external obligations. If they say they are going to do something, they WILL do it. It doesn’t matter if it’s a private goal no one else knows about or a deadline set by their employer. Upholders are just as dedicated to the promises they make themselves as they are to the promises they make other people.

Your strengths include being organized, planning and goal setting, consistency in getting things done both personally and professionally.

Your struggles include overworking, being too meticulous, holding yourself to unrealistically high standards.

Advice for the Upholder/Knight of Pentacles:

Remember that your worth is not measured by your accomplishments. Consider where you might benefit from more flexible, especially when things don’t go to plan. Make taking breaks non-negotiable!

The Questioner tendency could be described by the Knight of Swords.

Questioners respond well to internal obligations, but resist external obligations. They want to make sure they have a detailed understanding of what the obligation is and why it matters before they commit. They often research things from every angle and ask many questions before moving forward. If an external expectation doesn’t line up with their internal analyzations they will have a hard time following through.

Your strengths include looking at situations from every angle, researching all potential options, a desire to focus on what is truly important.

Your struggles include analysis paralysis, putting too much time into deliberation and not enough into action, getting overly fixated on making the ‘right’ choice.

Advice for the Questioners/Knight of Swords:

Remember that there is no such thing as a perfect choice, try to trust that things will work out just fine either way. Set boundaries about how much research and questioning you will do before you take action.

The Obliger tendency could be described by the Knight of Cups.

Obligers consistently meet external expectations, but struggle to be accountable to themselves. They tend to put everyone else first and are the most likely to say ‘yes’ to requests for assistance. Obligers are people pleasers, but have a hard time sticking to things they want to do just for themselves. Gretchen Rubin points out that this is the most common of the four tendencies.

Your strengths include caring deeply about other people’s well-being, being someone others can rely on, volunteering to help when a need is expressed.

Your struggles include putting your own needs last, difficulty prioritizing the things you want to do just for yourself, taking on more than your fair share of emotional labor.

Advice for the Obligers/Knight of Cups:

As you naturally respond to outer expectations, seek out external accountability for your internal goals and desires. Find a friend who can hold you accountable for the things you want and need to do for your own heart.

The Rebel tendency could be described by the Knight of Wands.

Rebels resist both internal and external expectations. Rebels resist things as soon as they feel like they ‘have’ to do them, regardless of if it’s something they’re doing on their own or something that comes with external accountability. Rebels want to do what they want to do, not what is expected of them.

Your strengths include being true to yourself, marching to the beat of your own drum, and coming up with innovative approaches.

Your struggles include disdain towards obligation, flying by the seat of your pants, flaking out on responsibilities.

Advice for the Rebels/Knight of Wands:

Instead of making the assumption you ‘have’ to do something, take on the attitude that you WANT to do something. Rebels thrive when they feel autonomous and know they are choosing their actions, not being forced into anything.