Tarot just bitch slapped me about my upper limit problems 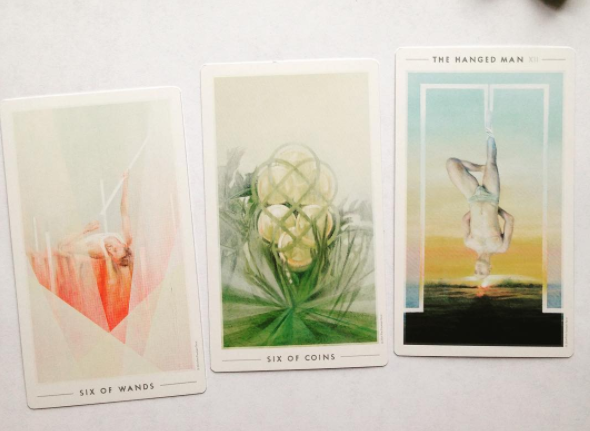 A couple of days ago I felt inspired to give myself a reading with the Fountain Tarot. I didn’t have a set focus area, I just had this strong intuitive sensation that I’d get a really powerful message. I turned over my cards, expecting to have an instant connection with the insight they would bring forward.

I drew the Six of Wands, the Six of Pentacles, and the Hanged Man, all in reverse. I turned the cards around, telling myself I wouldn’t use reversals since I’m still getting used to this deck (I later realized this was a mistake – the cards were reversed for a reason).

Uhhmmm…well, at this point, my intuition broadcast crickets. I stared at the cards, running over various textbook interpretations in my brain, but nothing seemed right. I felt disappointed – when I get that sensation that a reading is about to be really powerful, it’s never been wrong before. But I thought maybe this time it was.

This gave me an unsettled feeling. My rational mind assured me that this was all because I was working with a new deck, but deep down I felt like there was SOMETHING right in front of my face that I was missing. I even put the call out on Instagram to have people chime in with their thoughts on the reading! I got relevant and helpful comments there, each of which served as a compass to point me closer to my own understanding, but I still wasn’t quite there.

The next day, as I was preparing breakfast and not thinking about tarot whatsoever, the message from this reading suddenly CAME to me, crystal clear: I’ve got an upper limit problem.

There is a book about this topic, I haven’t read it (yet). But here’s my understanding of how this works: we all have an unconscious limit of how much “good stuff” we think we deserve. When we start having some success that approaches these unconscious limits of what we believe we should receive, we halt our own progress without realizing we are doing so. We start sabotaging ourselves, effectively suspending our ability to make further progress.

Well, holy damn fuck. THIS is what the cards were trying to tell me: The Six of Wands showed some of the good stuff and success I’ve recently experienced. The Six of Coins showed how I’ve been pressing up against my own limits of how much good stuff I’m capable of receiving. And the Hanged Man showed how this has put me into a pattern of stasis. The reversals hinted at why I had such a hard time circling in on the message – my conscious mind was still resisting acknowledging that this has been happening.

Once I’d been smacked over the head with the revelation that I’m experiencing an upper limit problem, so many things made sense. Here’s just one example.

When I offered my New Year tarot readings at the beginning of the year, they sold really well. Like, WAY better than I expected. It was awesome and amazing, and I was so grateful. I was riding the high of success, doing the work that I love to do, and feeling like my business was reaching a new level of goodness.

But then, during the last week of completing my purchased readings, I got sick. I hardly ever get sick, and when I do it usually just lasts a couple of days. But not this time! Nope, I was knocked completely on my ass for several days, and even once I could function again it took an entire MONTH before I was back at 100%. This lingering illness made it so I was incapable of taking the momentum at work in my business and channeling it into further good stuff.

Now, I’m not saying that colds aren’t caused by germs and whatever else. But I can’t help but believe that this lingering illness was linked to my upper limit problem. At an unconscious level, I saw that I was succeeding, and that success was getting too close to my unconscious allocation of what I deserve. And so I got sick, in order to stay in my status-quo level of success.

Your unconscious upper limits are established in various ways. They might be influenced by your innate personality, the things you learned from society as a child, your fears and ego, your karma, and so on. Considering where your upper limits come from can certainly be useful, but it’s even more useful to focus on how you can move through them.

Realizing that you have an upper limit problem is only the first step – but it’s a pretty powerful step, and sometimes it’s actually the HARDEST step. Now that I’ve completed this step (go me!), here’s how I’m planning to proceed.

I’m going to start by continuing to make my unconscious upper limits known to my conscious mind. This will happen through journaling, more tarot pulls, dreamwork and meditation. Once I have greater clarity about what my current limits are, I will continue the work to rewire them. This happens through affirmations, energy work, and catching myself in self-sabotage and redirecting my behavior.

Working through upper limits, like any type of self-discovery process, is complicated and unique to us as individuals. It’s a tough road to travel, but it’s the road that leads to a more meaningful, empowered and magical life. And so here I go, devoting to that road once again.