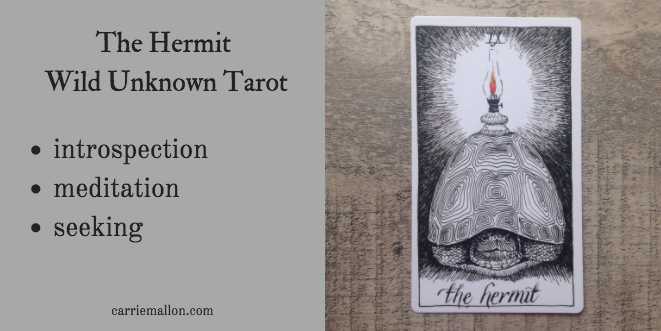 The Hermit Tarot Card Meanings in the Wild Unknown

Who better to portray the ideals of the Hermit than a tortoise? He wears his home on his back so he can literally go within. He peers out at us with a calm expression. He is not hiding out of fear, but rather out of a deeper wisdom that compels him to withdraw from the outer world. The Hermit senses that what he most needs right now can be obtained in the INNER world.

The scene around the Hermit is dark, but he carries a lantern upon his back, an orange flame giving the only splash of color in the card. The flame is vivid and confident. We might otherwise assume the Hermit is a timid character, but the flame shows otherwise. It takes great power indeed to turn away from the expectations, opinions and norms espoused by society. But the Hermit teaches that when you cultivate this inner power – through meditation, introspection and self-discovery – you can practice true authenticity.

Directly in front of the Hermit we see a splash of white illuminated by his lantern. This shows that he has a highly developed internal guidance system, and even though he may not be able to see the entire path before him, he carries a light that will always illuminate the next right step. He lets his path unfold naturally in each moment and trusts the spiritual pace of the universe. As a tortoise, this Hermit is not one to move quickly. He doesn’t focus on racing to a proverbial finish line. He knows that he must take time to reflect, to contemplate, before he embarks upon any given path.

Although all archetypes are gender neutral at their core, many tarot decks show the Hermit as a stereotypical “wise old man” complete with a long robe and flowing white beard, carrying a lantern. The archetypical Hermit appears in many well known stories (think Dumbledore in Harry Potter or Gandalf in Lord of the Rings).

The Hermit is often associated with a monk or some other type of spiritual seeker. While the Hierophant shows the search for knowledge in the outer world through experts and existing structures, the Hermit shows the importance of turning your search inward. That is not to say the Hermit cannot represent external help, as this card is often associated with mentors and guides. But the type of guidance the Hermit offers leads the seeker to their OWN understanding, instead of imposing a pre-determined belief system as the Hierophant might.

We all have an inherent inner guidance system, which serves as our own Hermit’s lantern. This card reminds you to quiet yourself and listen to that inner guidance, for it will rarely lead you astray.

When the Hermit appears, it is often a reminder to activate your internal guidance. Instead of seeking the answers from other people or avoiding being alone with your thoughts, the Hermit asks you to meditate. Journal. Contemplate. Turn your focus away from external distractions and explore what is within you. If you do feel as though external support could be useful, remember that the best mentors are those who only guide you closer to your own truth.