My journey with tarot… so far! 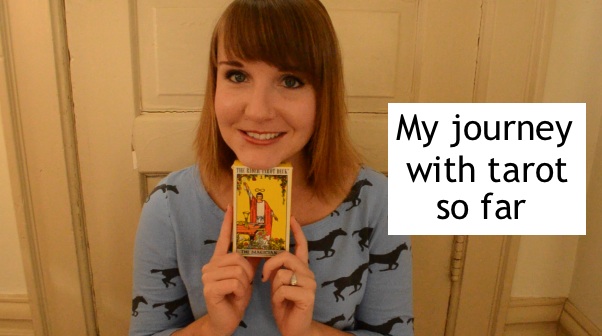 Last week, I asked for your thoughts on the content I’ve been putting out so far. I got some really nice comments on my YouTube channel and a few emails as well! A couple of people suggested that I talk about my journey with tarot – so that’s what I’m doing today!

I was introduced to tarot through my best friend and college roommate. We would sit on our living room floor eating ice cream and she would give me readings while she thumbed through the little white book (I remember seeing the Four of Cups come up almost every time).

This friend was involved in student government and helped bring a tarot reader to a campus Halloween party. Thusly, I received my first reading from a ‘professional’ (while I was wearing a pirate costume. It was Halloween, after all). I told the reader I was studying to become a kindergarten teacher. He smiled knowingly and told me that I would change my major and have a much more original career (turns out he was right).

A few years after graduating college, I found myself in the thick of a quarter life crisis. I could see my future stretched out before me like a vast, empty canvas. Instead of seeming exciting and full of possibility, this blankness seemed daunting. Life felt gray, void of any sparkle. I spent all my free time watching TV and eating ice cream in an attempt to numb the low-grade misery. I was stuck. Very stuck. Eight of Swords stuck.

Around this time, a few storms began to brew simultaneously in my inner world. I started to get little intuitive hunches. As I cautiously explored these hunches, I was slowly led to the resources I desperately needed to climb out of my funk. Out of the complete blue, I had a sudden urge to buy a tarot deck. And I do mean URGE. Despite the fact that I’d hardly thought about tarot since my reading years earlier, I suddenly felt that I NEEDED to buy a deck of my own. And so I did.

Over the next few years, I began to slowly explore and excavate my true self. I began to think of myself as my own best friend, someone I was excited to get to know. Parts of my personality that had previously been buried began to emerge. I slowly gathered courage to be more of myself and shed the masks which no longer felt right. I read books – lots and lots of books – on creativity, spirituality, psychology and tarot.

Through this continuing process of self discovery and recovery, tarot was there. The cards gave a voice to my essential self. In them, I saw my deepest, wordless wisdom. My life began to feel radiant and colorful, like the gray fog was lifting. I recognized the patterns in the cards. They spoke to me of the collective unconscious and the hero’s journey (concepts I’d been introduced to shortly before buying my first tarot deck).

As I read books and worked with daily draws, I grew more and more amazed with tarot. It wouldn’t be hyperbolic to say I felt like I’d found a map of my soul. Tarot covered it all. The grand, sweeping visions of powerful archetypes and universal experiences were reflected in the major arcana. The day-to-day activities, thoughts, emotions and experiences shone through in the minors.

It has now been about five years since I got my first tarot deck. I believe I was guided to tarot because I needed to be. I’ve grown, evolved and learned a lot in these past five years. Most importantly, I no longer feel stuck – and tarot has played a huge role in my freedom. Even so, I don’t feel like I’ve ‘arrived.’ Tarot has taught me that life is a constant process of emerging. But now, when I look out at the vast expanse of life before me, I feel vibrant, creative, dynamic. I’ve learned to love the journey – because after all, as they say, the journey is the destination.