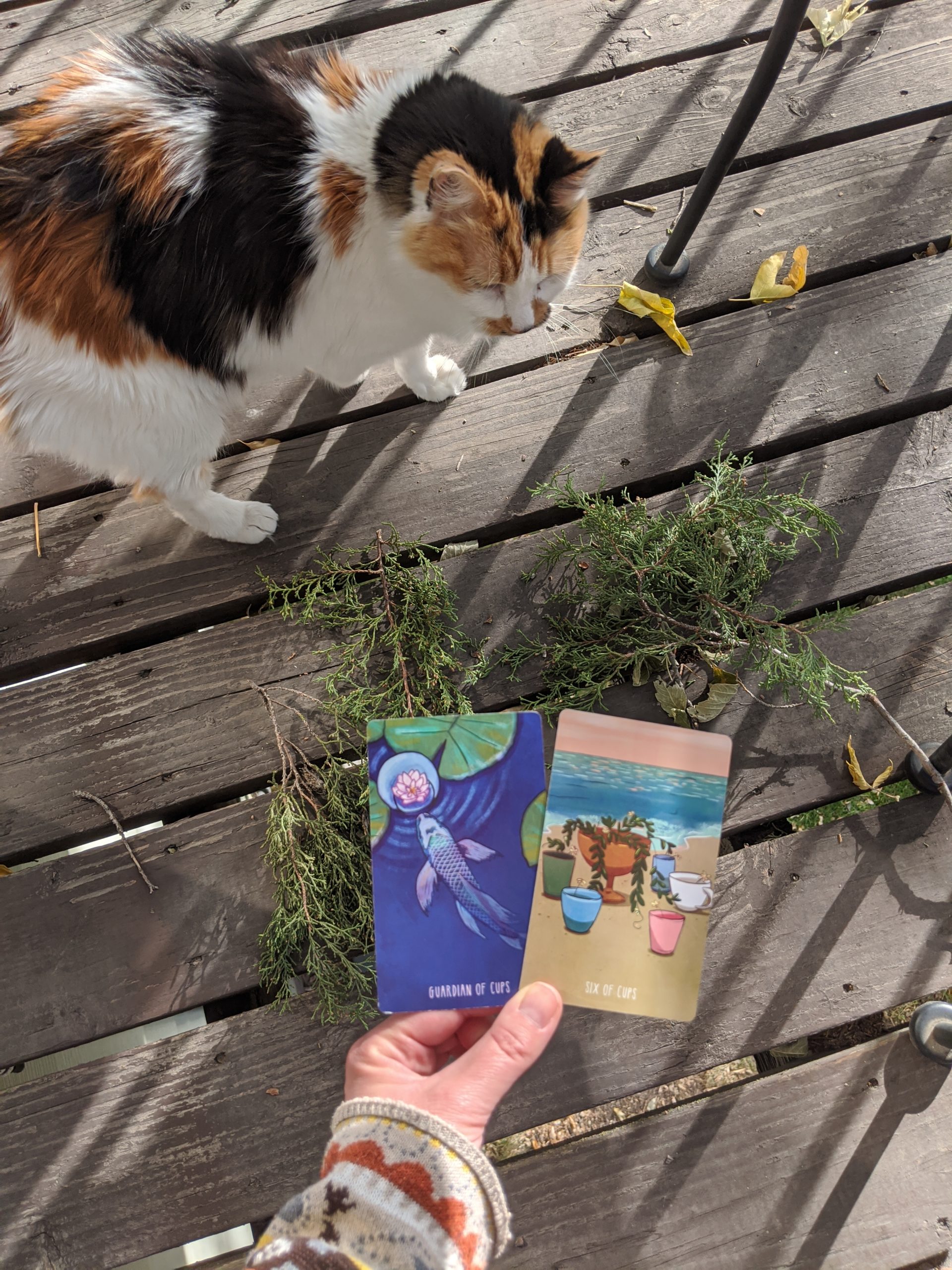 I’m sitting on my back porch so that when I’m not squinting at the computer screen, I can gaze out at the big trees in my neighborhood. It’s that kind of classic fall day where the leaves are golden and red and the sun gleams off them in just the right way to amplify their magic. There’s enough of a chill breeze you know it’s fall, but enough sun that you’re still radiant.

Lulu’s here too – she’s an inside cat but she occasionally gets to venture to the balcony. Right now she’s meowing at a cheeky squirrel who is doing parkour around the yard.

A few months ago I wrote a post using a method described by Mary K Greer as writing from your heart with tarot, and I’m going to do that again today, using the Spacious Tarot.

I shuffled and pulled the Guardian (Queen) of Cups.

This morning I was remembering a random meme I came across a while back where this person had a shirt that said “Don’t fuck with me” and in the next frame you could see the back of the shirt said “I WILL cry.” I personally relate very much and I need this shirt.

A few days ago, I went for a walk with one of my best friends who has recently gone through a great loss and we talked about the value of crying. Emotions are physiological sensations, and crying is part of the body processing them.

Around lunch time today, I told my husband that I feel like crying today. Why? I don’t know, why NOT?! It’s not about any one particular thing, sometimes I just feel like crying.

And as a sort of jarring contrast, yesterday on a walk I passed an apartment with a huge flag in their window that said “Trump 2020: FUCK YOUR FEELINGS.” Which ties into that whole ‘snowflakes’ thing in which being sensitive is equated with being weak or irrational or incapable.

Last week I talked about the Elder of Cups. And now I draw the Guardian of Cups. It all seems connected.

The core thing is this: the Guardian of Cups shows you that you can have firm boundaries (the cup inside of the flower) while still honoring your emotions. You can have a “don’t fuck with me” vibe while tears are streaming down your face. You can be sensitive and be a bad-ass as the same time.

Telling someone not to cry or saying “fuck your feelings” is not edgy or helpful. It’s passé.

The Guardian of Cups is emblematic of a new wave. This wave subverts outdated misunderstandings of what it is to be strong and rational and capable. To be strong is to know when you need tender loving care. To be rational is to incorporate intuition and emotional well-being into your choices. To be capable is not villainizing your feelings, it’s seeking to understand them.

I pulled another card and it’s the Six of Cups. Oh boy. Okay. Well, I already mentioned Trump once in this post and also in last week’s post and I’m sorry because I don’t like talking about him more than anyone likes hearing about him but it’s election season and I’m an American so it’s on my mind.

So, the Six of Cups made me think of that whole thing where a Trump campaign advisor tried to throw shade at Biden by comparing him to Mr. Rogers and people were like “um, being like Mr. Rogers is a good thing, actually.”

Sweetness and simplicity are words that often come to my mind when I see the Six of Cups. Also words I associate with Mr. Rogers. In our version, there’s a bigger cup which in my mind has given these tiny flowers to the smaller cups. There’s a sense of generosity and small but important acts of caring.

Now I am thinking of another meme that says something like “be nice to yourself, drink water and get sunlight, you’re basically a houseplant with more complicated emotions.” A very Six of Cups-ish sentiment, that is. So here’s the questions I’m asking myself, and maybe you want to ask them to yourself, too.

What’s one simple kind thing I can do for myself today?

What’s one simple kind thing I can do for someone else today?

I understand this may sound a little saccharine or childish but you know what? Sometimes it is okay to be saccharine and childish. I know the world is a very cynical place and somehow we have come to equate cynicism with intelligence. But today, both of these cards remind us that being earnest and sincere is pretty great, too.

And maybe in a jaded world, being a little more kind and sincere and earnest is actually a badass act of rebellion, too.