How To Read the Tarot Court Cards (the easiest way) 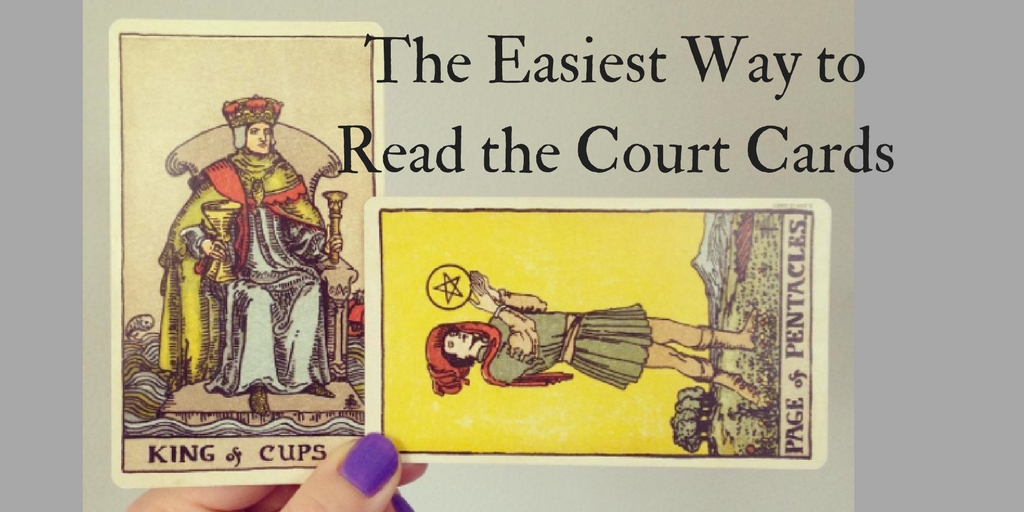 It’s a pretty common notion that the court cards are the hardest to grasp part of a tarot deck. That’s really saying something when you realize that many of us find the vast archetypes of a nuanced major arcana card like the Tower more accessible than an unassuming little card like the Page of Cups!

The Court cards throw many tarot readers for a loop, so today I’m going to share with you one pretty straightforward and easy way you can improve your understanding of the tarot’s court cards.

Before I get into the heart of this lesson, I want to say that just like with anything else in tarot studies there are many, many different approaches to the court cards. I’m firmly in the camp that there’s no right or wrong way to read tarot. My approach to pretty much anything with tarot is to take some traditional knowledge and blend it with my own personal style, and I think it’s useful to give yourself permission to do the same thing.

That said, when I first started learning tarot, I came across a simple yet really effective framework to understand the court cards. This mainly comes from Joan Bunning’s Learn Tarot course (the entire course is available for free online at learntarot.com). Much of what I’m going to share with you today is based on the framework I learned from Joan’s course.

By reading this article, you’ll gain a greater understanding of how to interpret the court cards in your own way. For additional practice, make sure to download the free worksheet included at the end of this post.

The Whats and Whys of the Court Cards

Let’s start by considering what the court cards really are. Why do they exist, and what do they contribute to the deck as a whole? Put simply, court cards can be thought of as representing either specific people, specific personality traits, or specific approaches to life. Just like real life people, each court card has its own quirks and characteristics – for example, some court cards are outgoing, some are reserved. Some process information analytically, some intuitively.

Psychologists have come up with many different ways of categorizing different personality types – think of the court cards as the tarot deck’s way of doing the same thing. In fact, the popular Myers-Briggs personality indicator defines 16 personality types, and it just so happens there are 16 court cards. Many people have linked up the tarot courts to Meyers-Briggs types, but we won’t go into that here! For now, just consider that when you draw a court card, it can be useful to consider how a specific type of person, or a specific aspect of your own personality, is currently effecting your situation.

How to Interpret the Court Cards

Now that we’ve given some consideration to what the court cards are, let’s dive into a framework for understanding and interpreting them. This framework is based off a simple premise: each court card has a RANK – in most decks the ranks are Page, Knight, Queen and King; and each court card has a SUIT – usually Cups, Pentacles, Wands and Swords. Each rank has its own set of characteristics, as does each suit.

I’m assuming you’ve already got some tarot studies under your belt, and you probably already have some understanding of the four suits. But I’ll give a simple breakdown of them here to serve as a reference:

A caveat before we jump in here: try not to let age and gender dilute your relationship with the court cards. When we talk about age and gender in the courts, they are only useful as metaphors. For example, a page has a childlike approach to life but does not always represent a literal child. A queen can be biologically male, and a king can be biologically female. Even though in most decks the court cards are given gender binary names, the court cards do not have to be interpreted through a gender binary perspective. It would work just fine to replace every instance of “she” or “he” with “they” or “them.”

There’s a lot more that could be said about gender in the courts – but that’ll have to be a different post for a different day! For now, let’s move on to a general framework for understanding the court ranks.

Intuitively Combining SUIT Plus RANK to Interpret the Courts: Examples

Just with the above descriptions of the suits and ranks, you have the skeleton you need to understand and interpret all 16 court cards. Exactly how you do this is up to you, but let’s look at a few examples of how this could work. Say you draw the Queen of Swords. How might you interpret this card within the framework of RANK + SUIT + INTUITION? Take a look at the reference charts again to get started.

Using the above outlines as well as your intuition, you might determine the following about this card.

QUEEN + SWORDS = This is someone who has a good amount of life experience. She’s developed mental astuteness and is not easily deceived. She understands the power of the mind and has the ability to influence others with wit, not force. Even when she doesn’t speak, she is always inwardly observing and making assessments about what she perceives.

Let’s look at another example, the Knight of Pentacles. Here again are our guidelines for rank and suit.

Combining these guidelines of RANK + SUIT while also drawing upon your own intuition, you might come up with something like this:

KNIGHT + PENTACLES = He is a hard worker, but sometimes he doesn’t know when to give it a rest. He values accomplishment, but can get fixated on a single detail instead of seeing the big picture. He can give great care to the task at hand but might be unwilling to upset his routine.

As we’re looking at these examples, keep in mind that your interpretations might not look like mine, and that’s okay. I’m giving these just to give you an idea of how this might work, not to say that my interpretations are the end all, be all. Let’s look at a couple more, just to cover a broad array of combinations.

PAGE + CUPS = She has an open-heart and doesn’t carry a fear of being emotionally hurt. She sees the glass as half-full. She is in tune with her inner realm. Trusting and loving, but perhaps at times too naïve and may get her feelings hurt easily.

Let’s look at one last example, the King of Wands.

KING + WANDS = He is a charismatic person who is always on the go. His enthusiasm is contagious, others want to do what he’s doing. He is willing to take bold action in order to create whatever it is that he desires.

If this framework seems useful to you, try going through and interpreting each of the 16 court cards this way. I’ve made a free worksheet you can use for this exercise. It’s a PDF and you can either print it out or type right into the document! Right click here to download.

Once again, it’s important to remember that there aren’t wrong or right answers. Especially if you are somewhat new to tarot, think of this exercise as a way to bond with the cards and form your own relationship with your deck. The sample interpretations I’ve gone through in this post have been pretty brief, but you might find you have a lot to say about certain cards, but other cards might throw you for a loop. Be patient with yourself and approach this exercise with curiosity.

You might be surprised how much you can get to know the court cards just by intuitively combining their rank and suit. This is a really powerful way to understand who the court cards are and how they can lend depth to your readings. As you get better acquainted with these court personalities, you’ll probably even see that the court cards remind you of real people you know, or of characters from books and movies.

So, what do you think? Does this method of interpreting court cards work for you, or do you have another brilliant way to read the courts? I would love to hear your thoughts, so leave a comment if you’d like.