How to create your own memento mori with tarot 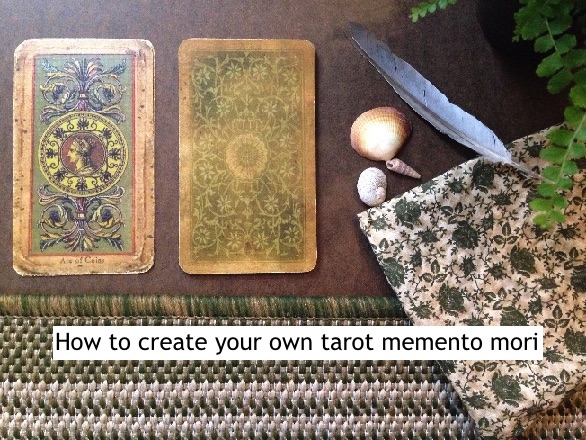 We are entering the dark part of the year. The days are shorter, the trees are shedding, and some would say the veil between the living and the dead is thinning. During this time of year many of us choose to contemplate our own mortality – not out of morbidity, but out of a respect for the cycles of life.

It’s one thing to pay attention to the big sweeping moments in life. That’s easy enough: the births and weddings and heartbreaks and other life defining moments. These big moments are symbolized in tarot by the major arcana. They are the energies that have a lasting impact, that stand out with boldness in our memories.

But how easy is it to shift in and out of presence with the passing moments in life? The moments that on first glance don’t seem largely important. The every day moments of working, procrastinating, eating, walking, and sleeping – represented by the minor arcana cards. It’s scarily easy for me to drift on autopilot through these every day moments If I do not consciously choose to live with awareness.

Memento mori is a Latin phrase which translates to “remember you have to die.” This concept is echoed in many cultural, religious and artistic traditions. Items can be used as a memento mori – physical reminders of our mortality. I recently stumbled on this article written by someone who created a memento mori using playing cards. Naturally, I was inspired to try something similar with tarot cards.

This project will span a year. I’m going to start on Halloween/Samhain, but you could start something similar at the new year in January, on your birthday, or on any other day that feels right.

There are 52 weeks in a year and 56 minor arcana cards. For this project, each card represents one week of the year. The extra four cards will accompany the weeks of the solstices and equinoxes. Unlike with most tarot related activities, the imagery isn’t particularly important, so you could use a deck with abstract cards (or even a deck of playing cards) if you’d like. In fact, I think this project would be even more effective with a simple deck as the illustrations might even be distracting! Here, the cards represent the passing of time – not their traditional meanings.

I’ll share my ideas so that you can try this for yourself, if you’d like. This is only intended to give a blueprint. I think there’d be a lot of interesting ways to tweak this project, and I’d like to hear how it works for you if you try it. 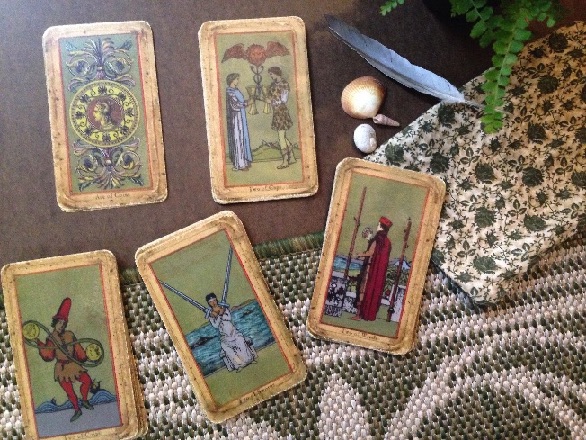 How to create your tarot memento mori

-Select your deck. This project will occupy your deck for a whole year, so choose a deck you’re okay not reading with for a while. Pictured here is the Deck of the Bastard.

-Set aside the major arcana cards. This memento mori is designed to keep you mindful of the small, passing every day moments represented in the minor arcana. The majors are typically given more attention, but the minors show the fleeting paintbrush strokes that eventually make up the entire landscape of our lives.

-Divide your minor arcana cards into four piles. The first pile will be the four aces. The next four piles will be the remaining cups, wands, suits and pentacles cards. There are 52 weeks in a year and 56 cards in the minor arcana. Aside from the aces, the rest of your 52 cards each represent one week in a year. The aces represent the equinoxes and solstices.

-Keep the aces separate. Stack the remaining four piles on each other with wands on the bottom, followed by cups, then swords, and pentacles on top (the order of the cards within each suit does not matter). I chose this order because of the way I personally associate the suits with the seasons. Tarot readers work with different seasonal correlations – my preferred method is to link pentacles to autumn, swords to winter, cups to spring and wands to summer. Note that the seasonal correlation here will be very approximate. If you start on Samhain as suggested, autumn will already be partially over of course.

-Place your memento mori cards face up somewhere special. You could use an altar, a desk, a bookshelf or whatever else. Leave space to form a second pile of cards to the left. 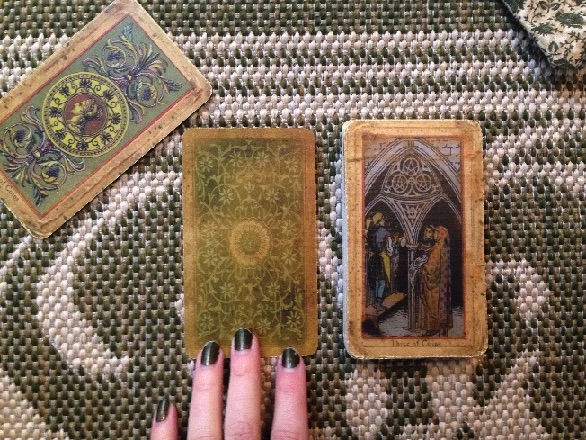 -On Samhain, take the top card (if you’ve ordered your cards as I suggested this will be a Pentacles card) from the big pile. This card represents the past seven days. Say out loud “I respect the week that has passed, and I move with awareness in the week that is to come.” Place this card face down in a new pile to the left of the main pile. You’re now starting to form a new pile that will represent weeks that are already “dead.” You could also add a more elaborate contemplation, such as keeping a notebook and jotting down a few quick memories from the week.

-When you do this ritual during weeks that contain a seasonal change (solstices and equinoxes), you will move one of the four Aces into your “dead weeks” pile in addition to your regular card.

-Repeat this process once each week, moving cards from the main “living” pile into the face down “dead” pile. May this help you stay mindful of passing time, respecting the small moments as they fade away…and remember that you will die.