Energetic commitments with the Two of Wands 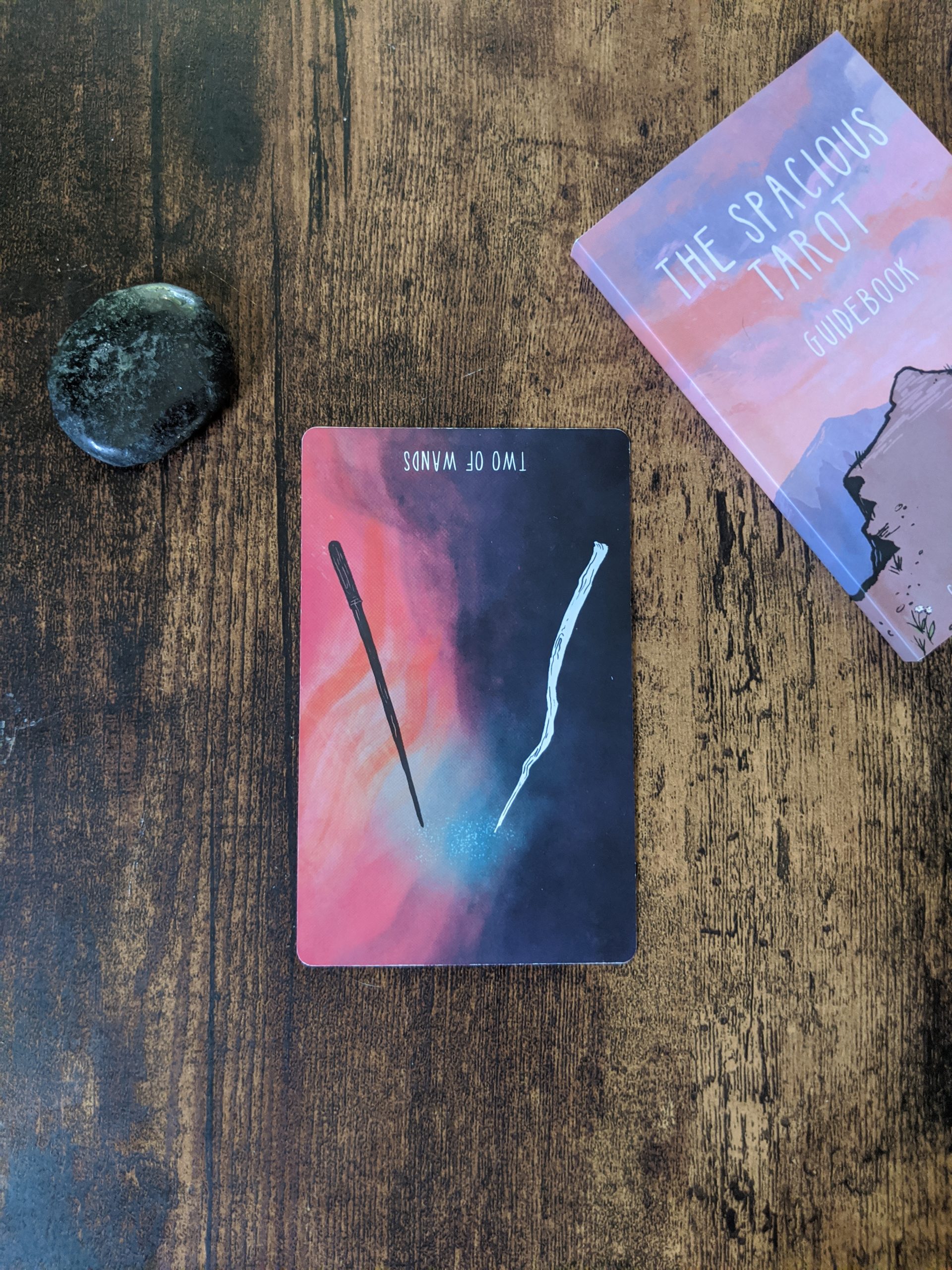 My brain is a bit jumbled today. This happens a lot when I sit down to write a blog post. I feel simultaneously like I have too much to say, and nothing to say at all.

Even writing that, my brain is like “omg nobody wants to hear about your self-doubt and brain fog. Borrrring.” But maybe we could still do with normalizing the fact that brain fog and blocks and resistance are just part of creativity. You can let them stop you, or you can acknowledge them and say “here I go anyway.”

A couple of months ago I wrote a post using a process Mary K Greer calls ‘Writing From Your Heart With Tarot.’ Sidenote: have you noticed I’m a Mary K Greer fangirl? I can’t seem to go a single post without mentioning her lately. But yeah: I’m going to try that again today.

So here I am, jumbled brain and all (good news, my brain is already a little less jumbled, which often happens when you just start doing something). Sitting in my office, black tourmaline on my desk and listening to a playlist that’s supposed to get rid of negative vibes in your home. The Spacious Tarot is next to me and I’ve already drawn a card, the reversed Two of Wands.

This is one of several cards that makes me think about the power of energetically committing to a certain direction. I’ve talked about this with several clients recently – in fact, one of them had this exact same card, Two of Wands reversed.

From a numerological framework, the Ace is infinite. With the two, things begin to take a more specific direction. Twos can be about clarification, affirming which direction we want the infinite energy that started with the Ace to take going forward. That’s actually why we did the illustration the way we did in the Spacious Tarot. It’s a bit of an homage to the Wild Unknown version of this card, when the card is upright it looks like you could reach out and grab ahold of those two wands. Almost like taking the reigns, getting the energy going in the direction of your choice.

I see wands as the realm of instinct; the forces that motivate and compel you. This is probably why in our deck the wands are more abstractly illustrated – to me, they are more abstract than pentacles or even swords.

So the Two of Wands can be about finding yourself compelled to affirm a certain direction. This isn’t about making a reasonable choice or even an emotional choice. It’s almost about feeling like something has chosen you. You are moved in that direction even if you don’t know why.

But the thing is, sometimes even when you feel reaaalllly compelled to take a certain direction, you hesitate. Right now the reversal feels like that hesitation. This is a two, so it’s still early in a cycle. Even if the pull is there, the energetic commitment isn’t yet made. The wands beckon you to grab on, but it’s up to you to say YES. And it’s amazing how often we say NO, even when something calls us so strongly and with so much fire. This reminds me of a quote from Mary Oliver:

“The most regretful people on earth are those who felt the call to creative work, who felt their own creative power restive and uprising, and gave to it neither power nor time.”

The reversal here makes me think about why we sometimes don’t energetically commit to a thing that calls us. There are many reasons you might not grab those wands, and in turn deprive them of power. Usually, we cast the blame outward: there’s not enough time, I had to do the laundry, it’s just a silly dream, and so on. There is validity to these things, of course. But sometimes they are surface level justifications for something much more nefarious: the internal factors.

Could it be true that internal factors hold you back as much if not more than external factors? Things like: self-doubt. Imposter syndrome. Fear. Brain fog. Procrastination. Resistance. Interesting how we’ve come full circle back to some of the things I described experiencing myself when I started writing this!

Now the question becomes: how do you move forward despite those internal factors so that you can reach out and grab those wands and not become one of the most regretful people on earth? The answer is deceptively simple: by energetically committing.

Energetically committing means making a pact with the Universe and your higher self that even when shit gets hard, even when your own brain or external obligations get in the way, you’re going this direction. It might not be as fast as your ego would like, it might be full of challenges, it might be inconvenient, it might be misunderstood by others. But it’s the direction you’re energetically committed to, because it has called you and chosen you. You’ve grabbed the wands and that’s that.

Once you are energetically committed, it’s on. You’re doing it. You find a way to make it work despite the excuses that may keep trying to creep into your mind and despite the setbacks that inevitably come up along the way. Once you’ve energetically said YES, the adventure is inevitable.

So the Two of Wands asks you: what fire is uprising in you? Will you step into your power? Will you hem and haw and let the momentum go by unclaimed? Or will you confirm the direction that calls you and energetically commit to your path?

No pressure, but the choice is yours.