Doing with a hell of a lot of doing 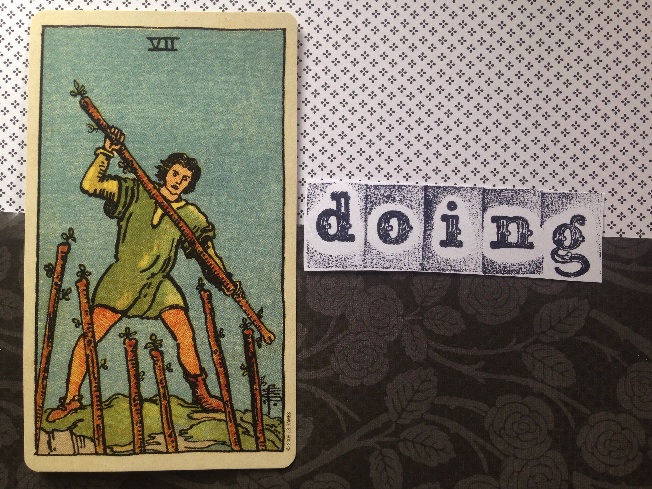 An hour ago, I was sitting in the same spot I’m sitting now, fruitlessly trying to make progress on another blog post. My brain was refusing to cooperate. My muse was sipping margaritas on a beach somewhere, unwilling to hang out with me even after I’d tried all my tricks to get her to show up. Getting each sentence down felt excruciating. Yet I forced myself to keep on going, doing, going, doing – despite being utterly fed up.

Finally, full of epic frustration, I snarkily titled the document “useless blog idea,” slammed my computer shut, put on my shoes and went for a walk.

As often happens on my walks, my discouragement changed shape. The hardness, the hell-bent state of ineffectual determination began to dissolve. I felt refreshed, like I was now looking at the situation without blinders.

As thoughts drifted in and out of my awareness, I found myself pondering the idea of doing without doing, an intriguingly paradoxical philosophy from Taoism. Here’s how this concept gets translated through the Carrie-filter: it is possible (and preferable) to accomplish things without stressing, forcing or pushing.

“Doing without doing” is that state of consciousness where we feel, at risk of using clichés, like we are going with the flow instead of swimming upstream. We are dancing with our inspiration, co-creating with the cosmos, and following the tempo that pulsates in our being. We are still being productive, we are still achieving concrete results, but we are doing so in a way that feels harmonious instead of aggressive.

Earlier this week, I drew a card to see the state of my energy and I got the Seven of Wands. Ahh. Yep. The very image of doing with a hell of a lot of doing! And as I walked and thought about this, I understood why I couldn’t make progress on the other blog post.

I was doing with a hell of a LOT of DOING.

Like many spiritually minded folks who are still steeped in Western culture, I am drawn by the premise of doing without doing, but have difficulty living it on a daily basis. Meditation, exercise and free-writing are all tools that work well for helping me cultivate a “doing without doing” approach to life. But occasionally, I still find myself operating from an adrenaline-induced “doing with a hell of a lot of doing” paradigm.

I’ve had a lifetime of subtle cultural programming telling me that I have to do with a hell of a lot of doing to get anything done. We’re all inundated with messages telling us we have to push for results, work hard, and be constantly busy in order to be seen as accomplished.

I’m not saying there isn’t truth in the sentiment that we need to be diligent in order to get things done. I’m not saying creative people with big visions (like you and me) don’t have to be DEDICATED about the pursuit of our ambitions. We do.

But we can’t strong-arm the muses into giving up the goods. We can’t get where we are going by sheer aggression. As soon as I eased out of the Seven of Wands approach, things felt more like I want them to feel.

We need not battle incessantly to thrive, bloom and achieve.
(Tweet this)

I have now finished my walk, and I am back at the computer. I’m doing again – but this time there isn’t so much DOING involved. Sometimes you’ve got to stop forcing, close the document, walk away from the project and come back to your doing when you’re ready to ease up on the doing. You dig?

Click here to book a private reading with me.