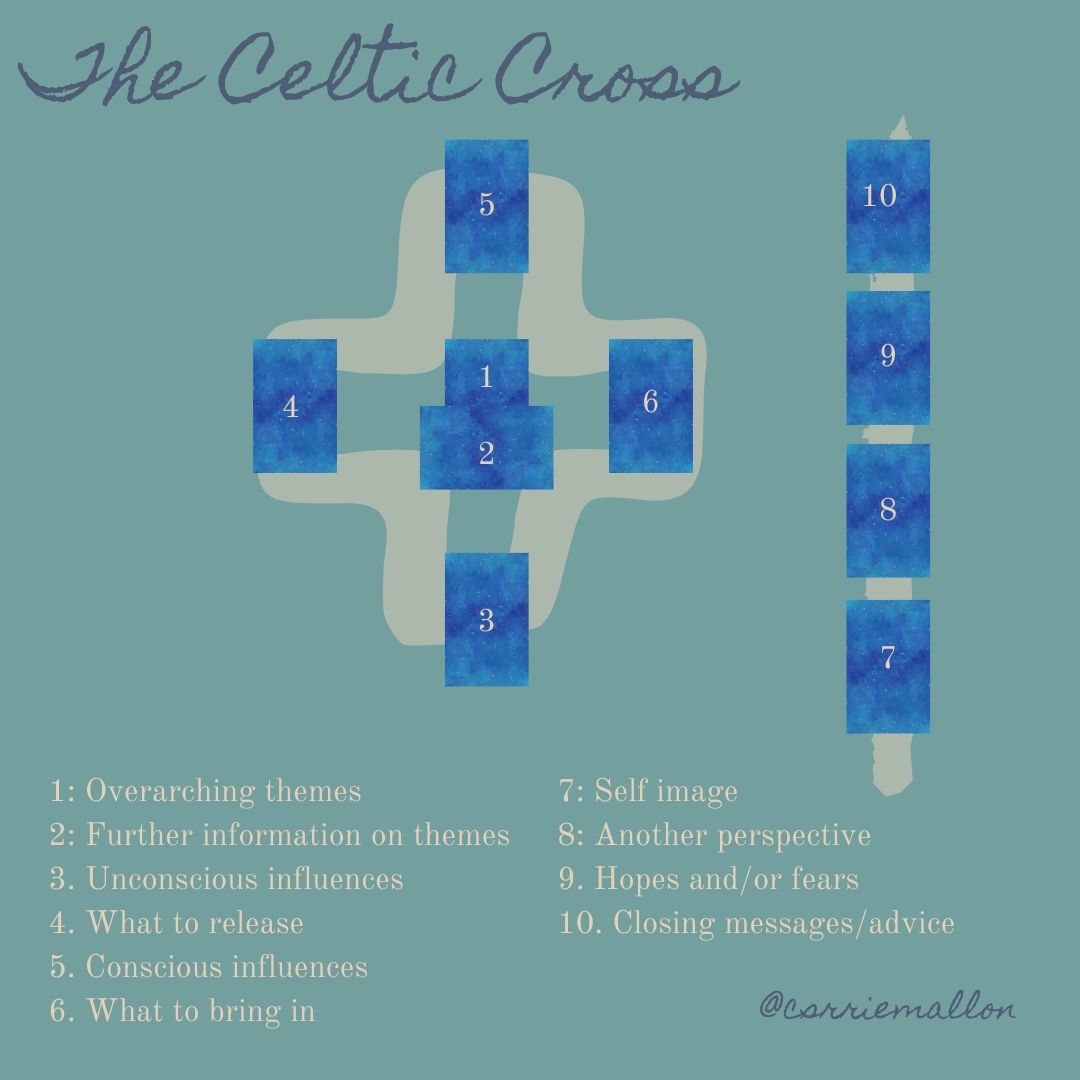 If you’re familiar with tarot, you’ve probably heard of this spread. I think it’s safe to say this is the most famous and iconic tarot spread. It’s certainly one of the older known spreads, originating over 100 years ago from the Golden Dawn – the occult society Arthur Edward Waite belonged to.

For better or worse, this was the first spread I learned when I began studying tarot. Mostly for worse, because this spread truly is a beast. Ten cards is a lot to grapple with when you’re a beginner! It was a bit like diving into the deep end before I’d learned to dog paddle. Due to memories of my own overwhelm when I was a beginner, when I’m teaching tarot I advise starting with smaller, three card spreads. But when you’re ready for it, the Celtic Cross can be a great source of insights and illumination!

Up until recently, it had actually been a year or two since I’d laid out a Celtic Cross at all. Not because I still shy away from bigger spreads, but because I got into a groove of custom-creating most of the spreads I used for clients. But within the past month, I’ve found myself returning to the Celtic Cross and using it for nearly all the client readings I’ve done lately!

This is mainly because I’ve been working through the book “Tarot For Your Self” by Mary K Greer. I’ve already gushed about this book a time (or two or three!) lately, but it can’t be said enough: what a great book. It is a classic for a reason. I still can’t believe it took me this long to get it, especially as I’ve been a great fan of Mary K Greer for a long time. She is a legend whose work really paved the way for what tarot has become in the modern world.

Fangirling aside, there’s a section in this book all about the Celtic Cross, and that’s what inspired me to return to this spread. There’s some fascinating info about the history and symbolism of the spread, and several variations on the spread positions. This was my favorite part, because although the Celtic Cross has retained a pretty specific shape and form over time, different people interpret the positions in slightly different ways.

I can’t for the life of me find this now, but I once heard someone (Joan Bunning, maybe?) compare casting a Celtic Cross to making a time-honored soup recipe that has been passed down from generation to generation. The idea being that things like soup or tarot spreads that have been made again and again gain a certain energy around them. We each bring our own flavors to the process, and also benefit from all the flavors that have built up over time.

So, what I’m going to share with you now is the way I interpret the spread positions in the Celtic Cross. Many of the positions are straight from the original, but I do have a few adjustments that I’ve found work better for my reading style. If it speaks to you, give it a try! I’ll also offer a few tips to help you get the most depth of meaning when working with this spread.

How to read the Celtic Cross

The image above gives a quick reference, but a more detailed understanding of the positions is helpful, so let’s take a closer look!

First up: do you need to ask a question when you lay out a Celtic Cross? It’s up to you, but I’ve found this spread is very versatile. When reading for myself, I rarely come in with a specific question, but I do usually have a specific focus area I want to explore. Having a focus area in mind is always helpful in giving context to your cards. But if you feel called to, you could also keep it totally open ended and simply trust that whatever messages you most need right now will come through.

The way I read cards 1 & 2 is fairly similar to traditional methods. Card one speaks to overarching themes or major lessons that are important to consider at this time. For me, card two offers more information about card one. Card two gives additional context to card one and often helps me hone in on the more subtle messages of the first card. These two cards are the heart of the spread, every other card usually relates back to these two in some way.

Cards 4 & 6 are traditionally read as the past and the future. I have modified these to read as energy moving out, or what you need to release; and energy moving in, or what to focus on inviting in. This works better for me as it makes the reading feel less predictive and more empowering.

While all the cards within the spread “talk” to each other, there’s a particularly strong conversation between cards three and cards five, and cards four and six. As such, another useful tip is to really challenge yourself to consider how each card relates to the other card in its pair. What is the dynamic between these two cards? Do they compliment each other, or contrast each other?

Card 7 I look at in a pretty traditional lens: this card speaks to your self-image. The stories you have about yourself in this moment, what traits you are most focused on within yourself, the beliefs about yourself that are most impactful right now. In my modification, card 8 goes along with card seven and offers another perspective on your self-image. This card is particularly helpful because in many instances our self-image is holding us back or not telling a complete story, so card eight opens up a bigger picture.

Card 9 is also traditional. I interpret this card as hopes, or fears, or both. Sometimes I intuitively sense it is speaking more to a hope, or sometimes more to a fear. But most often, I find it speaks to both as our hopes and fears are almost always interwoven.

Finally, I use another modification for card 10. Traditionally, this card represents the outcome. I was never really comfortable with that, because once again, I don’t really read predictively. I now use card ten as an opportunity for any closing messages or further advice to come through. I often find this card summarizes some of the key lessons that came in throughout the spread.

A few more tips for interpreting the Celtic Cross:

Give yourself plenty of time. As you experiment with this spread, you’ll get a feel of what that means for you. I am rarely able to get through this spread in less than 45 minutes. My client sessions are one hour long, and this is usually a good amount of time to do some in-depth exploration!

Begin by noticing overall patterns. This is actually a great way to begin any tarot reading, but especially a spread with lots of cards. Start by looking at the overall scope of the spread. What patterns do you notice? For example: is one suit more prominent? Are there more majors or minors? Do any colors or numbers stand out to you?

Relate everything back to the central two cards. I already mentioned this but it is worth repeating. These cards can serve as an anchor for you. Especially if you get thrown off on how to interpret any other card, it can help to ask yourself how it might relate back to the central cards.

Try spread variations to find what resonates with you. I’ve talked to a few people who soured on the Celtic Cross after trying only the “traditional” interpretations. Of course not every spread is for everyone, but before you totally kick this one to the curb, experiment with some modifications, or create your own modifications.

I hope something I’ve shared here is useful! If you have questions, comments or feedback, do share.