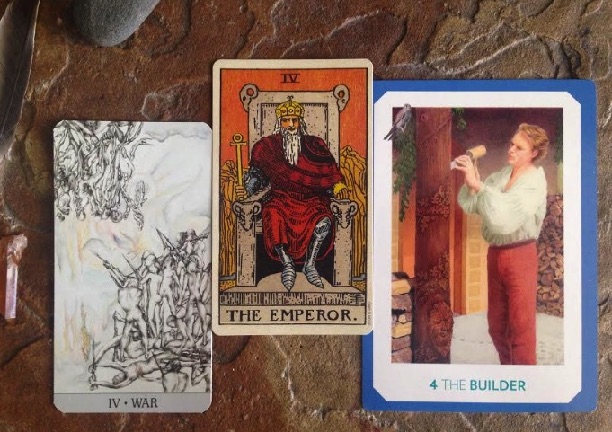 Every tarot card taps into a potent aspect of the human psyche, but trump four the Emperor is one of the cards that evokes the most polarizing reactions. People have strong opinions on this card, and the impressions of each deck’s creator is imprinted upon the deck. The “true” meaning of the Emperor is, as all cards are, vast. The Emperor is an archetype, personal but also mythical, transcending the individual consciousness and inhabiting the realm of the collective.

I’ve been thinking about the Emperor in particular because of the stark difference in two decks I work with: the Japaridze Tarot, in which trump four is titled War; and the Gaian Tarot, which renames trump four the Builder. Wow, right? That’s about as much contrast as possible for viewing this card.

As I’ve been thinking about this for myself, I’ve been revisiting the concept that each card has what Arthur Rosengarten calls a “spectrum of meaning.” I see each card as inhabiting a living, dynamic energetic space. This space contains the shadowy aspects of the card, and it also contains the lighter aspects. These aspects all bleed together and they come to the surface of our awareness in different ways depending on the circumstances at work in the exact moment we plug into the card. Intuition is a huge part of this process, and this is why I don’t think any card can have a “definitive” meaning. There are shared understandings of the card that inhabit this energetic space, but they are always processed through our personal understandings.

Let’s look at each of the aforementioned decks more closely. The Japaridze Tarot calls the card War, a title that takes a clear dive into the shadowy aspects of the card. Remember that when we talk about shadowy aspects this doesn’t strictly mean negative aspects. Shadow is a term to refer to things that are hidden, more difficult to access, unconscious or repressed. These are elements that do dwell in the previously described spectrum of meaning: destruction, brute force, imposing of order, staking ones own claim as ruler regardless of how this impacts others.

It’s understandable to be taken aback when you see this card titled War and depicting a scene of destruction. This card does not leave much room to explore a vast spectrum of meanings. Instead, it guides us directly into the more difficult energies of the Emperor. But I have to give the Japaridze tarot credit for not shying away from the shadow sides of Emperor energy. Tarot is a tool that challenges us to consider things from new perspectives, to wade straight into our own fears. When you look at the War card, you have nowhere to hide, no rose colored glasses to don: you are face to face with the shadow of the Emperor, and you can learn a lot here.

The Gaian Tarot takes another non-traditional approach, titling trump four the Builder. The title alone is enough to convey the lighter sides of the Emperor. As another reminder, light does not mean positive. Light aspects are those that are more readily apparent, consciously assimilated and optimistically focused. The Builder shows trump four’s potential for creating stability, ideal fathering, working towards a clearly defined outcome and stewardship of one’s territory.

I’d guess most of us will be more comfortable with the Builder than War. It is empowering to identify the highest and best channeling of a card’s energy. This is how we find inspiration and motivation through our readings. The Gaian Tarot’s depiction hints that although the Emperor does have the capability of destruction (the hammer he holds), he chooses to use this tool carefully and productively. The Builder leaves some room for exploration of the shadowy sides of the card, but not much. This deck decidedly leads us towards the light, but the light may not always be the full story.

What are your reactions to these two cards? My key takeaway is that it’s important for a tarot reader to give some consideration to the personal biases at work in each deck. Of course, every deck was created by a human, and every deck will have sort of slant – that’s okay. Cards that tap into the spectrum of meaning in a more neutral way are generally preferable for me – I like to have the space to consider for myself if a more shadowy or light interpretation is required.

But in working with these two decks, I’ve also been considering how much we can learn about ourselves when we’re confronted with cards that take a firm stance. It’s more comfortable for us to stay somewhere in the safe middle ground, but there is value in a card that bluntly demands us to face a definitive end of the spectrum.