The Hayworth Tarot: send help I love it Hi hello there is a new tarot deck out and it has become one of my favorite decks already (?!) it’s called the Hayworth Tarot and it is DELIGHTFULLY BIZARRE.

The above photo is what happened when I tried to pick out my favorite cards.

How this deck came to me… there I was, minding my own business on Instagram (as one does) when suddenly I saw someone posting images from this deck. At first I was like, WTF.

Then I was like, I need to zoom in on this image and look at it.

Then I was like, this deck is weird. Hmm. But that Hermit card! And Strength! Woah. Hmm.

Then a day went by, and throughout the day I would think about the deck.

So about 24 hours after first seeing it, I bought it, and then basically stalked my mailbox until it showed up.

The Hayworth Tarot is based on a fiction podcast called Welcome to Night Vale. I had never heard of this podcast before, but after discovering the deck (and while waiting for it to arrive in the mail) I listened to a couple of episodes.

I’m still not sure how I feel about the podcast. I do like the premise: the town of Night Vale is a surreal dessert town where time doesn’t work and odd things happen. The podcast is delivered almost as a news brief, keeping citizens aware of the strange and unruly happenings in the community. So far I like the premise of it more than I’ve liked any of the actual episodes, but it’s good enough that I will keep listening.

But the deck? The deck, I love. There are a couple of images I’m now able to correlate to references in the podcast, but many I have no context for. Having no context is almost even better though, because then you can really just project your intuition onto the imagery.

ANYWAY. I filmed an unboxing (unbagging?) and first impressions video as I went through the deck for the first time. So check that out. I’ll also be sharing more thoughts on the deck below. 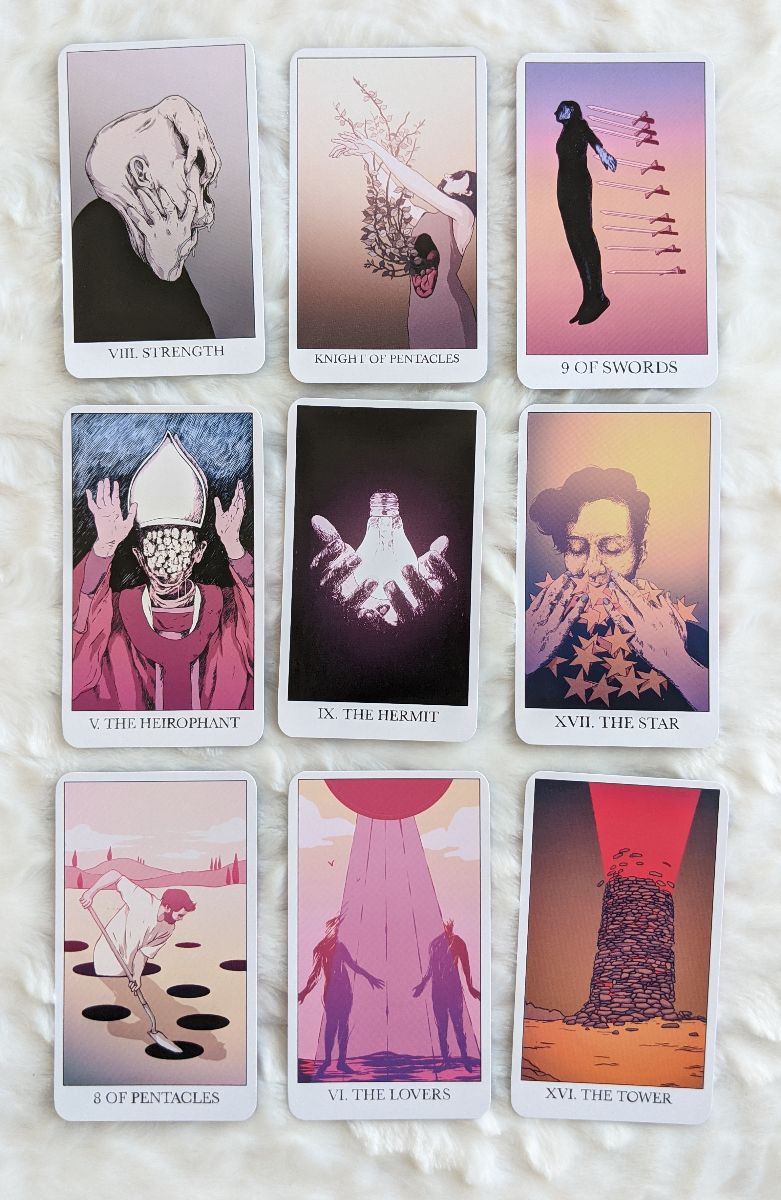 This deck is just the right amount of weird for me. It’s different enough to challenge my perceived notions of cards. It’s surreal enough to be used for deep psyche diving and exploration of the stranger aspects of self. It’s slightly unsettling but not overtly disturbing. Well, except the Knights are kind of gruesome. And there are some dismembered bodies. So, y’know. Your mileage may vary with how gruesome you perceive it to be.

I already mentioned having a hard time picking favorite cards, but so far the ones above are the very top contenders.

I mention this in the unboxing video, but Strength in any deck often makes me think about facing the more unruly aspects of yourself. We’re used to seeing a woman with a lion, the lion can be a metaphor for what is untamed and maybe even dangerous or threatening within you. But it can also be a metaphor for what is true and wild about you, but hidden away because maybe it’s not so acceptable among polite society.

In this Strength card, we have someone tearing off their own face. Could be a metaphor for removing the polite masks, letting the beast within you come out for better (or perhaps for worse). The figure wears a shadowy cloak, reminding me of shadow work: facing and integrating what is repressed within you. ALSO THE HANDS ARE GROWING OUT OF THE HEAD AND CHEST, WHY I DON’T KNOW BUT IT IS WEIRD AND I AM HERE FOR IT.

All of the Knights in this deck feature entrails and in the video I mention the Knight of Cups in particular actually making me feel a little squeamish. But since I filmed that a couple of days ago it has grown on me, I just needed to get over the shock of seeing, you know, entrails on a tarot card. A cup of entrails (which is what we see on the Knight of Cups) is not gonna be everyone’s cup of tea, so to speak.

But the Knight of Pentacles is one of my favorite cards. Something is growing from the entrails. Sometimes the gaping black holes in you are not just nihilistic voids, but fertile places making way for beautiful stuff to become real in this world.

My biggest disappointment with this deck is that although there are many very original takes on the cards, there’s also a good chunk of cards which are basically just RWS clones with a Night Vale twist. Don’t get me wrong, they are still delightfully bizarre and I like many of them, but my favorites in this deck are the ones that give us something different. Like the Nine of Swords.

The Hierophant is just fun? Why do I think this is fun, I don’t know, but I do?! First, we have a misspelling. Which I don’t mind at all because honestly Hierophant and Heirophant is basically like potato po-TAH-to amirite? This is not the first deck to misspell this title and who cares. The Spacious Tarot also has a misspelling so it’s we’re in good company.

Also who cares about the spelling with an image this rad. What is happening? His face is melting. And he’s throwing his hands up like he’s yelling BOO. He’s in traditionalish pope-ish garb which makes it feels kind of irreverent. I like it a lot.

THE HERMIT! It actually reminds me a little of our version in Spacious Tarot. Hands holding a lightbulb in the dark. It’s good. It’s real good.

The Star was one of the first cards I saw on Instagram and it threw me for a loop for a second but then I decided it was great. What was intended by the artist? What is this referencing from the podcast? Who the hell knows. But what I see is someone giving themselves permission to experience abundance. To snort the stars, if you will. How often do we hold ourselves back from joy? All the damn time. How about we stop doing that and be like the figure on this card.

The Eight of Pentacles speaks to my inner nihilist. I also mention this in the video but usually the Eight of Pentacles is like, work hard because it gives life meaning! But this one is like, hey, sometimes society just drills that message into us because #capitalism. Sometimes working hard is really just digging yourself and all of us into a hole. Very timely as we humans proceed to ignore the dire straits our planet is in and put profit above all else. Sad, but important to consider.

I don’t even mind how RWS inspired the Lovers is because it is so great. So these people are basically being disintegrated or something and like pulled up into… a UFO? Another dimension? Also the colors are great. It works for me.

The Tower is one of my favorite tarot cards in general so I’m glad they did something a little different with it here. Instead of crumbling to the ground this one is being pulled up, kind of like the Lovers. Sometimes you just need to abandon your current reality, let it fall apart and reassemble itself in the new dimension. 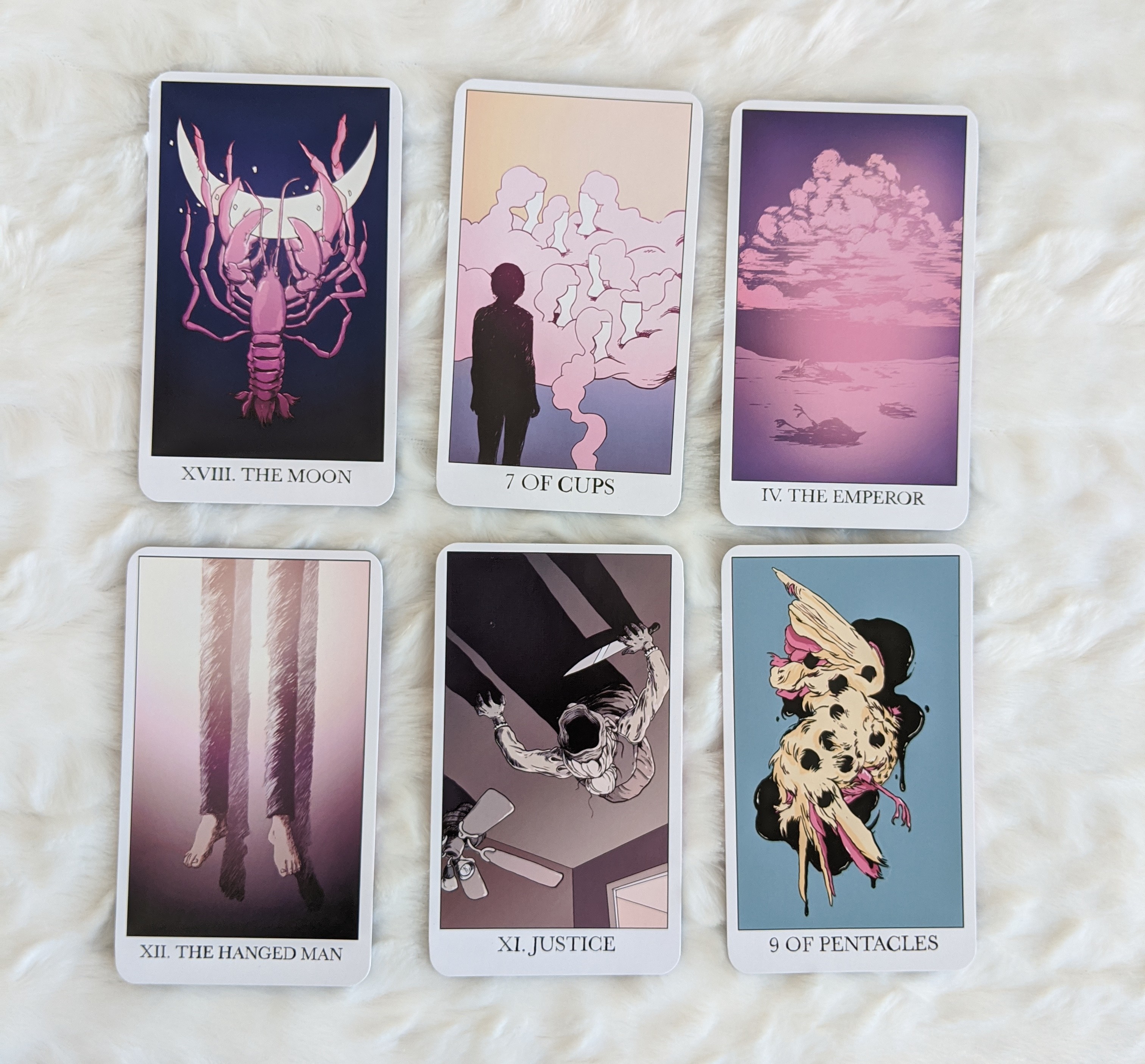 Here are a few of the cards I don’t like as much. The Moon and Seven of Cups are just kind of let downs, because the deck as a whole has a very Moon + Seven of Cups vibe to me, so I would have liked to see something more unexpected with these two.

The Emperor just isn’t doing it for me. Can’t get the Emperor from that image. Maybe I’ll get there eventually?

The Hanged Man is another that’s just a little too on the nose and boring. I can work with it but it’s not particularly thought provoking for me.

Justice might be my least favorite card in the deck. I really can’t get to an interpretation of Justice from this image. One of the first episodes of the podcast I listened to was called “The Faceless Old Woman Who Secretly Lives in Your House.” I think this is supposed to be her but it’s definitely not how I pictured her! I don’t think they did her…. justice.

The Nine of Pentacles is another that I just can’t get to the card meaning from this image. Is that a dead bird? Why though?

Anyway… as I said in the beginning, this has somehow already and quite unexpectedly become one of my favorite decks ever. I’m not sure how “popular” it will become – I think it came out in November, but when I looked it up I only found two other unboxing videos besides mine. They probably haven’t really marketed the deck to tarot readers as I’m sure the target market is people who listen to the podcast. But my fellow tarot readers, do not sleep on this deck because it is awesome!

I am kind of tempted to do what I did with the Wild Unknown and blog through my thoughts on every single card in this deck. I love it that much. It probably won’t reach Wild Unknown levels of popularity because it is quite odd, but I think there will certainly be a subset of people who love the Hayworth Tarot as much as I do.

You can purchase the deck here.